Downbeat and Offbeat Fiction: “The Shadow Year” by Jeffrey Ford 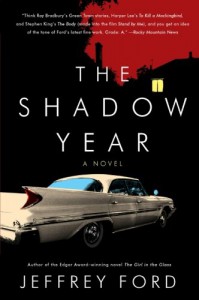 "Her small stature, dark, and wrinkled complexion, and the silken black strands at the corners of her upper lip made her seem to me at times like some ancient monkey king. When she’d fart while standing, she’d kick her left leg up in the back and say: ‘Shoot him in the pants. The Coat and vest are mine.’”

In “The Shadow Year” by Jeffrey Ford

The world-wide craze for superheroes is obvious. We all see ourselves as passive victims and don't expect to rescue ourselves.

There's also the national craze for vampires and zombies in books, TV, movies, and the web. It may seem odd that a deeply Christian country is also obsessed with vampires, but as Joseph Glanvill wrote in the 1600s, if you deny the existence of demons and witches, you deny god. I see it as another form of projection: a few survivors are surrounded by the dead, i.e., the masses of the unemployed and soon-to-be-unemployable. I’m thinking USA here.

Magical realism is a bit like SF, where colorful, fanciful personas, places and technologies are used to explore all too real attitudes, trends and prejudices. It could be said that Ford's take on it is America's second exploration of the genre, since it was also prevalent in the 50's and 60's (and to some extent the 70's) with the proliferation of pulp magazines, SF publications (also the birth of the modern comic book) and SF movies and TV shows (Outer Limits, Twilight Zone, Star Trek).