"The Judas Goat" by Robert B. Parker 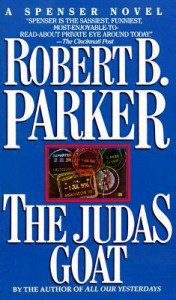 Spenser and Hawk team up for the first time.

On the 5th stroke (aka, 5th book in the Spenser Series) the magic was broken...

This novel never really grabbed me like so many of the other Spenser novels.

I think a lot of it comes from the terrorist setting, but I could never really put my finger on it. I’ve read and enjoyed the previous 4 Spenser novels but I wasn’t as keen on this one. It didn’t read like a gumshoe story so much as an international action thriller. Like the vacum abhors oxigen, I abhor cheap thrillers...

The usual writing style is still present, but to a lesser extent. Some sentences are very economical in the way they pack the action and make me imagine what is happening the way I want. Every time I read some passages over I can imagine them differently and more exciting.

The way the fighting scene is described at the end of the book is enough to justify reading it.

Another plus for me is the way Hawk starts taking centre-stage. It's quite noticeable that Hawk starts being written better. I'm thinking that he's possibly one of the greatest supporting characters in mystery fiction and is often imitated (Dennis Lehane comes to mind). Almost near every modern mystery writer from Denis Lehane to Harlan Coben has their version of Hawk, but the original stands alone.

Two Spensers in a row. Saving the rest for later enjoyment.