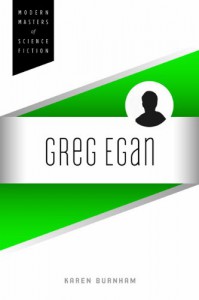 Disclaimer: I received an advance reader's copy (ARC) of this book from NetGalley in exchange for my honest review. All opinions expressed are my own, and no monetary compensation was received for this review.

Last year I decided to re-(…)-re-read Egan’s most successful novel: “Permutation City” once again. It still resonates highly with me:

When I took notice that a book on Greg Egan, by none other than Karen Burnham herself (vide Locus Magazine Roundtable on Greg Egan: http://www.locusmag.com/Roundtable/2012/03/roundtable-on-greg-egan/ ), I just jumped at the chance to get an advance reader’s copy by NetGalley.

The scope of Burnham’s book on Greg Egan is a rather extended analysis of the latter’s work. Greg Egan has been for more than 20 years one of my favourite authors (not specifically of SF).

I’ve been reading SF for more than 30 years, and in SF criticism and scholarship the accumulation of facts is still being done, as the stream of books and articles in the last decade testifies. Burnham is less concerned with surveying the bare facts of Egan’s body of work than with interpreting its significance. Burnham successfully attempted to establish the common proprieties of Egan’s writing, whether in the treatment of a theme or in the broader scope of the SF field. SF considered as a system belongs within much larger systems. Burnham is able to fully contextualize Egan’s work, in a way I’ve seldom seen done before in the SF field (eg, John Clute, Gary Wolfe, David Langford, Damien Broderick, and now Karen Burnham; They all set out to establish their own lexicon and understanding of SF – to criticize it in its own language, not the language of another art form). With the exception of the above-mentioned, I’ve always found that SF’s current modes of criticism are extremely lacking in creativity.

In the current SF environment, a writer like Egan must appear as mutant. What distinguishes him from other writers is, apart from his erudition and depth of knowledge, is his ear for the slightest nuances of language, and his abundance of imagination and ideas. His work is the product of a personality exerting the whole range of his intellectual faculties to the utmost. Not, as it’s quite common in SF, merely playing with worn-out ideas that have been used and recombined ad nauseam so often that all that remains for the writer to do is to invent some minor twist. Egan’s imagination never seems to tire, and he gets better, and his ideas become more daring, the older he gets (I’m still saving the two first books of the Orthogonal trilogy for later). SF nowadays is full of burn-out writers, bound to repeat themselves forever. What strikes as the most fundamental truth about Egan’s work is his ability to appeal to sophisticated readers, and not to those who are willing to accept the most silly explanations, if only they get an explanation at all. Egan is a man hungering for absolute truths, and yet only too painfully aware that there are none. That all our knowledge is conditional and temporary, and is ever likely to be superseded. Egan does not advocate any form of passivism, quite on the contrary, he urges responsible action, and the need to create ethical systems in a world devoid of higher meaning, lacking absolute values, a world that just is.

Burnham was able to shed light on the fact that much of the intellectual tension of Egan’s novels is derived from the contrast between the essence of things, and their outward appearance, and never more so than in his masterpiece “Permutation City”. Egan’s heroes yearn for the haven of absolutes, but they’re faced with the recognition that they don’t exist, that man is alone, and confronted with the task of creating his own, necessary relative standards of moral action. Egan is a moralist who does not believe in unchangeable moral laws, but who urges intelligent thought from this reader.

On page 13 of the introduction: Russell Letson when referring to Greg Egan states: "I'm willing to defend the preposition that the ruling passion of Egan's work-as-whole is curiosity [...]"and "'curiosity' is such a watery word for what I sense in Egan. [...] a passion not only for structural, functional, and operational understanding but for the implications and connections that make for value or meaning". This for me epitomizes what makes Egan different from other SF writers.

Burnham’s book makes me want to read Egan again, but this time by using her book as support and basis for this rediscovery. This way I’ll be able to appreciate Egan more. As hard SF goes, Egan’s is harder than most. Usually, if an author wants an interstellar civilization, he or she must introduce wormholes, warp drives, or whatever to get the characters from one place to another. Not Greg Egan. For him there’s no easy way out (on page 30: "there can be no doubt, that Egan has staked his reputation on the notion that pure scientific enquiry is a worthy subject for fiction in its own right, and that it is entirely fair to challenge readers to stretch their understanding of physics and math as far it will go”). Not for Burnham as well. No better praise is needed.

On a side note I loved the conspiracy theory involving Ted Chiang and Greg Egan, instantiated through comparisons of some of the work from both authors.

Also worth mentioning in Egan's 2011 interview was his take on the purpose of SF, which was also a clever insight on Burnham's approach to the interview: "you can find critics who have spent their whole careers discussing the genre who don't think scientific discovery even counts as a form narrative. But understanding how the universe works is by far the most important story in human history; nothing has had more impact on our lives" (page 170 on my advance reader's copy). For me that's still the reason I keep reading SF nowadays. Although less and less so, but that's the nature of the beast (aka "The SF Market", especially the american one).