The Things and the Nothings: "Much Ado About Nothing" by William Shakespeare, Sylvan Barnet, David L. Stevenson 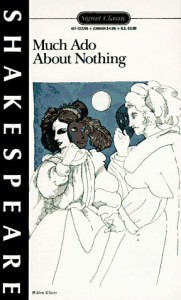 NB: Read in tandem with the Branagh, Whedon and BBC’s versions. This review draws extensively from my reading of the three movies, as well as from my re-reading of the play.

Let’s get this out of the way first. “Much Ado about Nothing” is one of my favourite Shakespeare’s plays.

Each time I re-read it, I always feel Shakespeare uses it as part of the macho banter in the male-dominated culture of this soldier band of brothers, but it also has a serious side in creating a sense of male insecurity and mistrust of women.

The entire play is underlaid with mistrust of women- Benedick's first line is, "were you in doubt, sir, that you asked her?" Leonato's jest lightly plays with the stereotype of the unfaithful wife and the masculine fear of raising another man's son and Benedick immediately takes him up on it. I think Shakespeare is creating a cast of men who are very much in a male only world and struggle to trust women on any level. It's notable that Don John is a known quantity and yet both Claudio and Don Pedro are quick to believe their eyes and fall for his trap, even though they themselves have just set a similar trap for Benedick and Beatrice and might be expected to stop and think how easily such a thing could be faked. Leonato immediately believes his daughter is corrupt, though only a second's reflection should make him realize that he (and Beatrice) could not have been unaware of a "thousand" midnight meetings between Hero and her imagined swain.