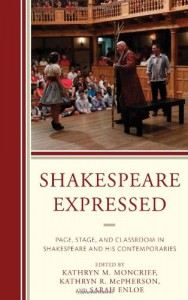 “The study of Shakespeare may on its surface seem esoteric, but the skills gained in the study and practice of the arts and humanities are primary. The ability to read carefully and critically, to understand and interpret complex texts, to listen and view productions attentively, to think deeply and purposefully, to write clearly, to speak articulately, and to perform publicly are important skills not just in an academic setting, but in the world at large as students prepare to pursue meaningful employment in an increasingly competitive environment.”

Chapter 2: “Speaking in the Silence” by Deaf Performance at the Oregon Shakespeare Festival” by Lezlie C. Cross

Chapter 3: “’I have given suck’ – The Maternal Body in Sarah Siddon’s Lady Macbeth” by Chelsea Phillips

“A pregnant Lady Macbeth reframes much of the play, even beyond her appearances on stage, and becomes a visible signifier of the dynastic implications of Macbeth’s actions. The potentiality encoded in her pregnant body creates a new level of tension in the play not present if the couple is perceived as barren.”

This book draws on essays presented on the Blackfriars stage at the American Shakespeare Center in 2011. What do we get? Essays by scholars, teachers and theatrical practitioners (actors, directors, dramaturgs and designers) promoting ideas that can be translated into classroom experiences. Shakespeare is all about staging choices, challenging modern actors as they embody Shakespeare’s characters, the way the physical and technical aspects of theatre in the Shakespeare’s day affected performances, and the way the playtexts can keep on being enlightening on the stage and in the classrooms today.