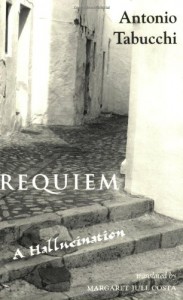 “Were someone to ask me why I wrote this story in Portuguese, I would answer simply that a story like this could only be written in Portuguese; it's as simple as that. But there is something else that needs explaining. Strictly speaking, a Requiem should be written in Latin, at least that's what tradition prescribes. Unfortunately, I don't think I'd be up to it in Latin. I realised though that I couldn't write a Requiem in my own language and I that I required a different language, one that was for me A PLACE OF AFFECTION AND REFLECTION”.

In “Requiem” by Antonio Tabucchi

Affection and reflection: with these two words, Tabucchi defined his book better than any reviewer would be able to. "Requiem" is a small masterpiece of contemporary literature, from which one can only complain about one thing: it ends too soon for those who are taking delight in it. It's a very subjective thing, but when you read something that impresses you as language, regardless of its meaning, that seems to be so perfectly expressed that no one could have written it better, that makes you want to telephone a friend at 4AM and read it aloud, then you're probably reading a great prose stylist. I also pay attention to a writer's ability to create interesting, appropriate and original metaphors, similes, etc. A few top off-the-top-of-my-head's examples of what I would call great prose stylists, really the greatest of the great, and they’d be Shakespeare, Proust, Walter Pater, Frank Kermode, Gibbon’s “Decline and Fall”, Faulkner, Antonio Lobo Antunes, Woolf’s “Mrs. Dalloway” and “To the Lighthouse”, William H. Gass, William T. Vollmann, Cormac McCarthy, John Donne in his sermons (which are enjoyable purely as prose), and many, many others. Again, it's all very subjective, and everyone who cares about this stuff probably has a different list. Hell, I would have a different list if I made it two minutes from now... Having said that, let me fanboy on Tabucchi as hard as I can, and on “Requiem” in particular. This is a tribute to the dead, a fictional Tadeus (the narrator’S best friend), Isabel (his lover), and Fernando Pessoa. But it is also a tribute to a city almost dead, the old Lisbon that the Europeanization of Portugal had been destroying. Tabucchi is passionate about ancient Lisbon and describes it with affection for the all 12 hours during which the main character goes out in search of his ghosts. On the last Sunday of July, the anonymous narrator is reading "The Book of Disquiet" by Fernando Pessoa under a mulberry tree in a farm in Azeitão, when he suddenly finds himself at the Lisbon dock waiting for the "dude" with whom he realizes he suddenly had a scheduled appointment. The "dude" is Fernando Pessoa. While trying to figure out how to fulfill his commitment to the poet, the narrator wanders through an almost deserted Lisbon (people have been refreshing themselves on the beaches), following clues that lead him to the Museum of Ancient Art, the House of Alentejo, the Cemetery of Pleasures, Brasileira do Chiado Café and other traditional points of my Lisbon.

If you're into European Literature, read on.