Beckettian SF: "The Man in the High Castle" by Philip K. Dick 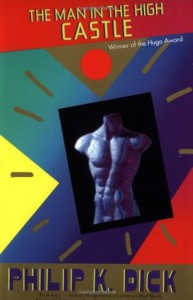 “The Man in the High Castle” is my second favourite PKD novel, after “Do Androids Dream of Electric Sheep”. I read both novels in the same year, back in the day, along with “Ubik”, “VALIS” and “The Three Stigmata of Palmer Eldritch”, and most of PKD's short fiction. Without doubt the most mind-bending year of reading I've ever had, and the one that hooked me on SF more than any other. The thing I love about his stories more than anything else is their mastery of chaos and illogicality. Reality in a PKD story is held together by the desperate hopes of his characters, and its always falling apart beneath their feet. Love it!

As for PKD's prose not keeping up with his ideas and co... I agree... and also agree it's often part of the fun. Although here, as noted, I found his writing mainly quite elegant.

I've been hunting around for speculation as to why PKD called Hawthorne Abendsen's book “The Grasshopper Lies Heavy”. Dick says in the book that the title is a quote from The Bible, but if so it is not in a common translation. You can find some speculation elsewhere; being speculative about a Dick novel means we'll be wandering into some fairly strange territory... I've also asked the question on my own blog, so there may be enlightening comments there.