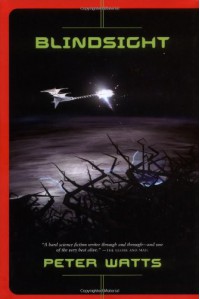 In “Blindsight” by Peter Watts


What if: There is only one consciousness that we all share? (Universal Consciousness)
What if: People are caught in the illusion of separation? (Encouraged by the limitations of the five senses)
What if: Fear and insecurity give rise to the need to think of ourselves as the creators of our consciousness? (Perhaps we tune into consciousness like a radio tunes into a station).

"Consciousness" is body-mind. It is implied in the very meaning of the word "consciousness", the "con-" or "com-" signifying "together" or "altogether". What this "together" refers to is the senses and sense impressions. Body-mind is sensate consciousness, and is called therefore "mortal self in time" or "ego-nature". It is particularistic and therefore associated with "point-of-view" or perspectivising consciousness, like a searchlight or the beam of a flashlight stuck in one direction. This, and its self-understanding, is reflected in the famous symbol of the Enlightenment of a pyramid surmounted by the all-seeing eye such as symbolised still on the Great Seal of the United States, but is called by Blake "Single Vision & Newtons sleep" or "Urizen" or Urizenic Man. This is the "point-of-view" consciousness structure and is typically what we call "consciousness" or "mind". It is the perspectivising eye of da Vinci, but it is sensate.