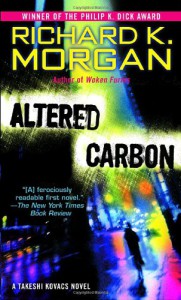 “If they want you, sooner or later they’ll scoop you up off the globe, like specks of interesting dust off a Martian artefact. Cross the gulf between the stars, and they’ll come after you. Go into centuries of storage, and they’ll be there waiting for you, clone-new, when you re-sleeve. They are what we once dreamed of as gods, mythical agents of destiny, as inescapable as Death, that poor old peasant labourer, bent over his scythe, no longer is. Poor Death, no match for the mighty altered carbon technologies of data storage and retrieval arrayed against him. Once we lived in terror of his arrival. Now we flirt outrageously with his sombre dignity, and beings like these won’t even let him in the tradesman’s entrance.”


Cyberpunk, a historic sub-genre that was out of date by the time most people had started using Windows, cool! That said, Gibson was better than ever with the near future Blue Ant trilogy, and Stephenson is off doing whatever caught his attention, before hopefully returning with some more Shaftoes and Waterhice, I mean houses. That said, Gibson's “The Peripheral” offered some fascinating directions, but were too interesting for that hoary old sub-genre title. I've always thought of the Altered Carbon books as SF pulp really and the TV version just confirms it for me.